I happen to love roasted red peppers.  I mean….loooooooove.  Maybe it’s because I grew up eating them. I guess it’s an Italian thing.  Whilst most kids were eating peanut butter and jelly on Wonder Bread, I was snarfing down roasted red peppers dressed with fresh garlic and olive oil on slices of chewy Italian bread.  (The good life, baby!)

I’ve been craving (the inspiration for most of my recipes) a roasted red pepper cream sauce lately and wondered if I could try it out using cashew milk in place of the cream.  The results were wonderful.  Another reason I absolutely adore cashew milk.

I did run into a problem with how to serve the sauce.  Zucchini noodles, a/k/a zoodles, were just too strong and overpowered the sauce.  Another problem with zoodles is that they can tend to get a little watery, thus diluting sauces. This is ONE sauce that you DO NOT want to dilute!

Problem solved when I tried spaghetti squash as a “macaroni” of sorts. (“Pasta” isn’t in my Italian Mom’s vernacular.  It’s “macaroni”…always “macaroni”.)  With a milder taste and dryer texture, it worked out especially well.

If you’ve never roasted a pepper – don’t fret!  It’s super easy to do and the results are well worth the effort.  If you are currently eating roasted red peppers out of a jar – DON’T tell me.  Not only is this against everything I believe in, a pepper in a jar just doesn’t come close to a freshly roasted pepper – in taste or texture.

As an aside, I NEVER serve food to my family that looks like the picture above.  I happened to be in a creative mood at the time.  To serve in reality, I threw the shrimp on the plates, drizzled on the sauce, tossed the spaghetti squash with more sauce and plopped it on plates.  It still tasted gooooood.

I think this sauce would also be nice on a piece of grilled mild fish such as mahi or sea bass, on scallops or even gluten free pasta – if you’re not grain free.  I would love to hear your ideas on how to use this sauce in the comments below… 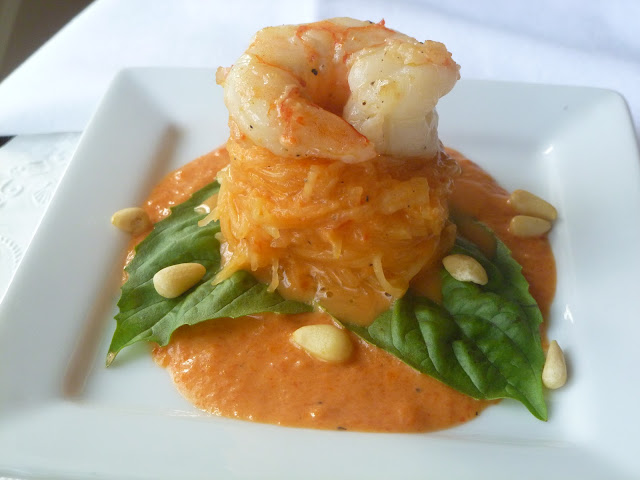